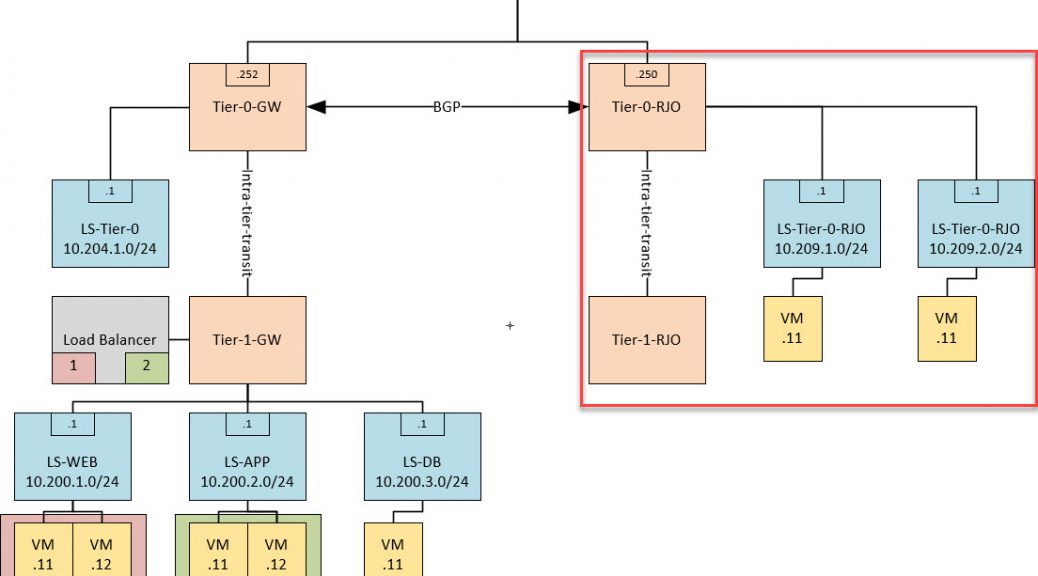 So after the theory, it is time to create some routed networks. In order to do this, I created a design on what I want to accomplish. Part of the design is already in place, but for this blog I have created the part which is visible in the red square: 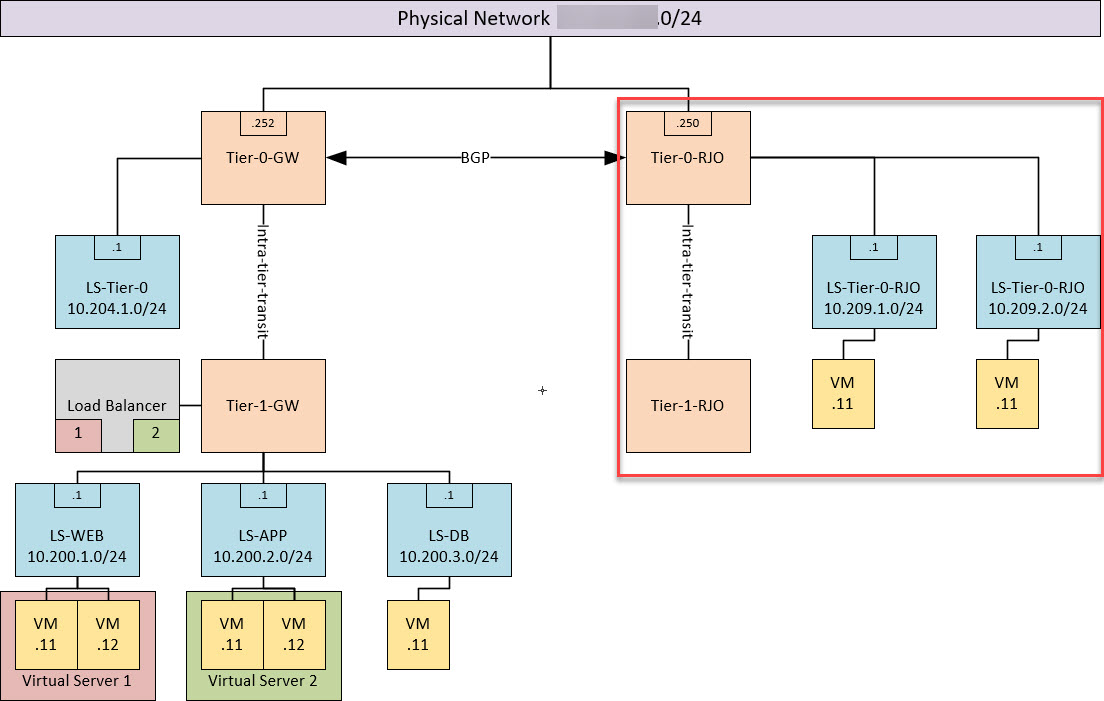 I also connected a segment to the tier-0 gateway, just to see how routing between tiers would function and as might be expected, routing is done within the hypervisor.

So time to create the new parts within the design.

First we have to create a new Edge Node. This is necessary because my existing edge node is not capable of running multiple tier-0 gateways with uplinks to the physical network. So when creating an Edge Node, it is important to have the following information handy:

After all this information is gathered, it is time to create an edge node:

After the edge node is created and running, it can be added to an Edge Node Cluster (no picture taken, this is self-explanatory).

When the edge node cluster is available, we can deploy our tier-0 gateway:

And after that we can create an interface, which can be used as an uplink for this tier-0 to the physical network (last octet being .250).

At this stage, the tier-0 gateway is available and new segments can be created and connected to the tier-0. As can be seen in the picture, I created two segments, connected to Tier-0-RJO (one showing):

As you can see, this segment is connected to Tier-0-RJO. I have added an IP-address and subnet to the segment, which will automatically create the corresponding interface to the tier-0 gateway.

This way I have created two segments, with the subnets 10.209.1.0/24 and 10.209.2.0/24. Both connected to the tier-0 and as such virtual machines deployed to these two segments should be able to communicate with each other:

Within NSX (V or T) there is a tool called TraceFlow which allows us to see a little further than just a response to a ping request. So to see how traffic flows from one virtual machine to the other, I used this tool.

It displays the path the packet takes: 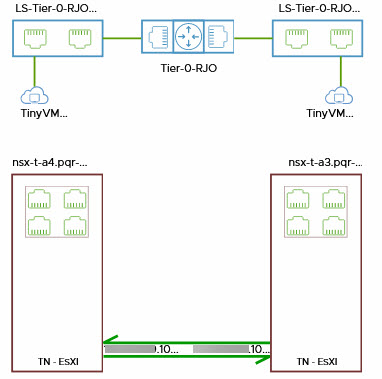 and every step along the way: 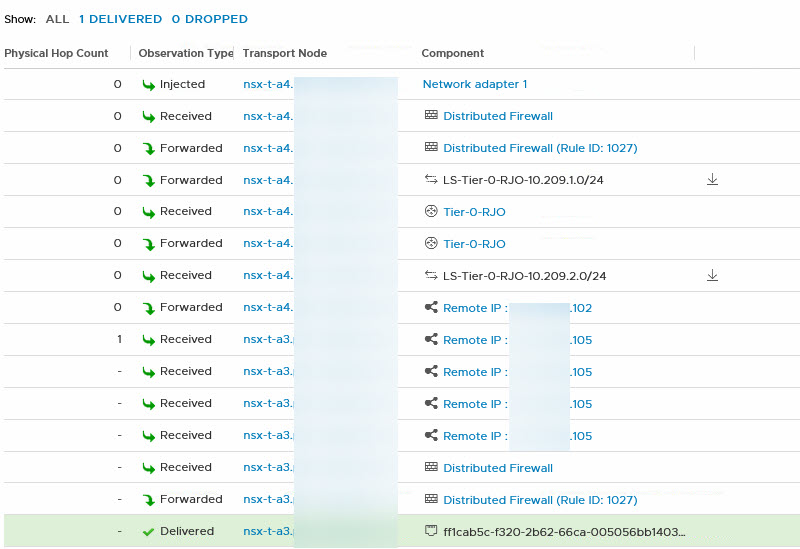 So this basically is everything in the red square…

However, I also want to see if it is possible to communicate from this part of the network, to the part on the right. I want to use my web-server, which is connected to the segment LS-WEB.

If I try this without any further communication, it (of course) fails. There is no route-information being exchanged between both tier-0’s and also no static routes have been configured.

Then connect both tier-0’s as each others neighbor:

After that, I selected which routes need to be advertised between the tier-0’s (by default nothing is exchanged): 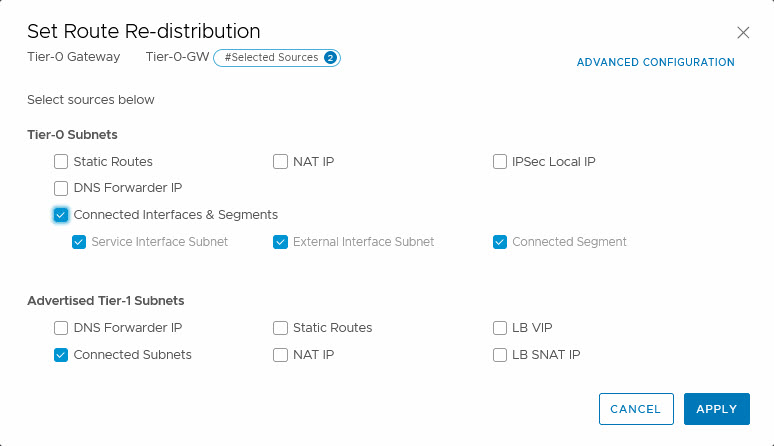 and after that, Bob’s your uncle:

Just to see how the path between the two virtual machines is, I used TraceFlow one more time, pretty impressive flow, for such a small environment 😉 : 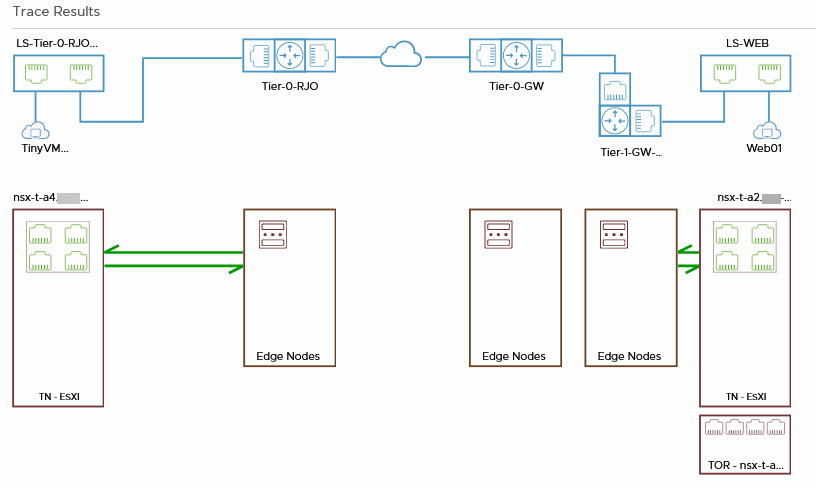 So that is routing within NSX-T. Next up, Load Balancing…