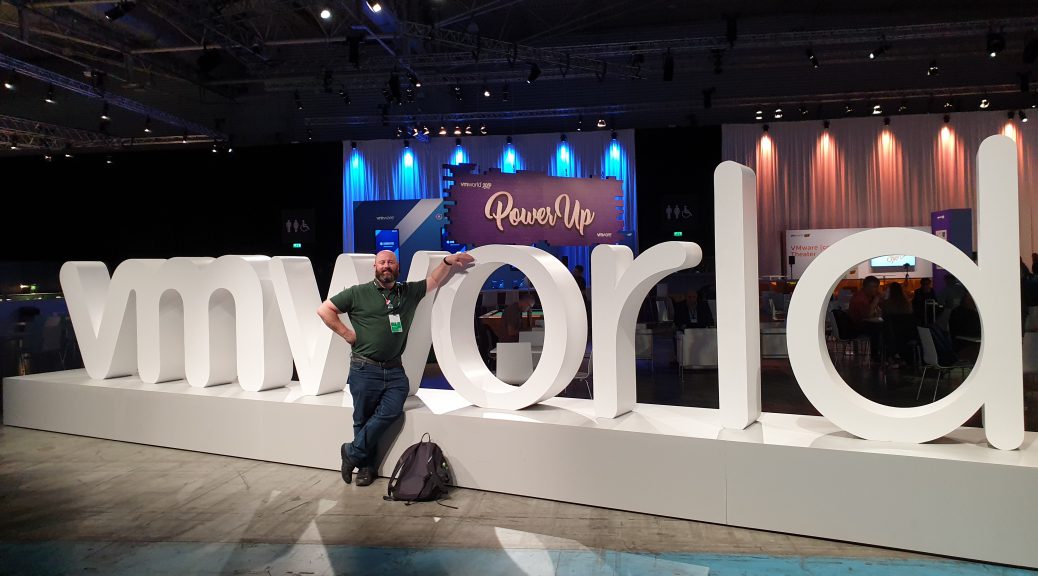 It seems like the most logical title, since the site is called My SDDC. Just a small recap of my experiences during this VMworld. It was my seventh in total, started out in Cannes in 2008, the first one in Europe if I remember correctly and a relatively small amount of people (although at the time, the 3000 people attending felt massive).

This year there were approximately 14.000 people attending and I got to be one of them.

Since I work for PQR, I have been allowed to visit VMworld, and we like to take customers along for the ride. We can help them with travel arrangements, but it is especially nice for people to have a group in which they can bond and discuss, without any hidden agenda. So we started off with traveling to Barcelona on Sunday the 4th of November. The flight was a little delayed (about an hour and 15 minutes), but that gave the chance to see the start of the Formula 1 race in the US. We didn’t get to finish is, because the delay was over at a certain point and we had a quite uneventful (and so pleasant) flight to Barcelona. There we were met by the lady that organized the travel and other activities in Barcelona. The mini-bus that took us to the hotel, was also a little delayed (it was not allowed to stand there for a long period of time), so we arrived in the hotel around midnight. A couple of the people went out for a night-cap, but for me, it was time to turn in. I tend to try to get to bed before or around midnight during VMworld, in order to get as much out of the conference as possible.

On Monday the conference really got underway. It was a very nice and sunny start of the day, as our mini-bus brought us to the venue for registration:

After that there was a day program for a couple of the customers that wanted it, and I went to the HOL to do my first Project Pacific lab. Although it was a simulation, it was pretty insightful and gave some information about this great new addition to vSphere. Running Kubernetes natively on vSphere sounds like something that can be really useful. Although it still runs in a virtual machine, this virtual machine is so optimized that this way the performance on a host is better than when running bare-metal containers on it. Pretty impressive:

If you want to take a look yourself, the lab is not yet available on the HOL, but keep an eye out for it. It will probably be named HOL-2013-01-SDC:

After the HOL and some meetings with vCommunity and vExpert friends, I took a sneak preview at the Solution Exchange being built:

and after that, I went into the first session, this was a long one. 4 hours about Kubernetes on vSphere. I had received an email earlier that day, informing me that a laptop would be necessary to do the labs. Unfortunately I didn’t bring a laptop to Barcelona (just a tablet with a keyboard). But one of the customers was also doing this session and he brought two laptops, so I could lend one of those and be able to do the labs. Thanks again Tin Tin :).

The session started off with the theory, in which the architecture was described. For me, as a relative novice to this field, a very interesting piece of insight into the world of containers. The labs helped to better understand the theory.

About three hours into the session, I left, in order to be able to attend the Partner Keynote. A nice session where one of our partner-organizations (ITQ) was represented on stage. Pretty impressive!

The Monday-evening is the traditional “PQR-Customer” diner and we were 17 strong in one of the (many) restaurants in Barcelona. A very nice diner with lots of interesting conversations. Also, our Partner Manager from VMware attended.

The next day, Tuesday, was the “official” start of VMworld, with the first keynote. I was able to sit next to my former colleague and now VMware-employee Viktor van der Berg (www.viktorious.nl) who had reserved me a seat in the bloggers-section. A very interesting keynote and I live to see and hear Pat Gelsinger speak and talk about the road that VMware is on. Always impressive to see the consistency in vision that VMware demonstrates. The picture stays the same (more or less) but every year there is more content in it, that has been or will be delivered.

The keynote (of course ;)) ran a little late and so all sessions would start a couple of minutes later. I arrived “on time” and got a chance to talk a little bit with one of the presenters. This was David Welch from House of Brick. I had seen an earlier talk from him about licensing Oracle on VMware and this session was (again) very interesting. He was joined by two attorneys from Crowell & Moring who worked with him on the Mars versus Oracle case, which is a pretty compelling story. Although they could not go into detail about the case, since it was settled out of court, their message was pretty clear: Fight for your Right. Oracle may try to bully organizations into making large compliance payments, but it can definitely be worth the effort to see if they are legitimate in their claims.

In the afternoon I had sessions on Project Pacific and on NSX-T and the last session of the day was a two-hour “whisper” (which means you are not allowed to share the information ;)) session on the NSX-T roadmap from a routing perspective. And without saying anything I am not allowed to (since I am under NDA) I can say that there is a lot of very interesting stuff coming out in the next versions!

The day was closed with a nice (pre-Benelux party) diner with VMware and one of the customers, and the VMware Benelux party. For me, the main component of the party (outside of meeting a lot of vCommunity friends) was about the football match between Chelsea and Ajax. A lot of emotions during that match, going from high to low.

Wednesday has been a day that I usually watch the keynote session from the VMworld Village, but this time I decided to sit in the audience, and that was a very good decision. The second keynotes in the “olden days” were usually filled with technical stuff and demos, but in the last couple of years, they were more a “talk by the fire” style talk. I didn’t much care for that style, but this year they changed back to the style of the old days. A lot of demo’s around all kinds of new technology. Some close to my world, others a little farther away (but not less interesting) and after all this, there was a guest speaker in the form of Bear Grylls. And I have to say, his talk was truly inspirational. I think that most people in the audience will agree with me that this was one of the best second keynotes at VMworld Europe ever.

The sessions on Wednesday were a bit mixed. Although I very much enjoyed the presentation skills and energy that was given at the “Service-Defined Firewall Reference Architecture Deep Dive”, it was far away from being a deep dive. I loved the Star Wars reference of the Death Star as being destroyed by a perimeter breach, but left early, because the content was not as I expected it, based on the description.

In the afternoon I had a second whisper session about the new functionality in NSX-T around Federation. This is some pretty interesting development and (for environments that are not too large) will prove very useful.

After this, I hád to attend the one-and-only vBeards picture. This time it was dedicated to Movember and if you haven’t already, please make a donation: https://de.movember.com/en/events/view/?id=Y7a7.

Here is the picture, see if you can spot me 😉 :

The last session of the day was about Cloud Deployment and Architecture. Also a deep dive and this was one. Very interesting session and a lot of demo’s and cool flings to show what is possible.

I skipped VMworld Fest. I have been to two of them in the past and am not that interested. Instead, I had a nice dinner with two of the customers at an excellent (small) Italian restaurant.

Thursday, the last day of this year’s VMworld, was a good one. I again was able to meet a lot of vCommunity and vBeard friends, including the one-and-only @v_Gandalf:

And since it wasn’t too busy, I was able to make the yearly picture with the famous VMworld letters:

The sessions on Thursday were very good as well. Two of them were the ones I had the highest expectations of beforehand, about NSX-T Reference Design and Minish Desai did not disappoint. Not only very (very!) good content, also a nice presentation-style with lots of humor (which not everyone enjoys equally, but I do).

After these last sessions of the day, it was time to say goodbye to VMworld:

and head to the airport. Also saying goodbye to Barcelona and hopefully, until next year!